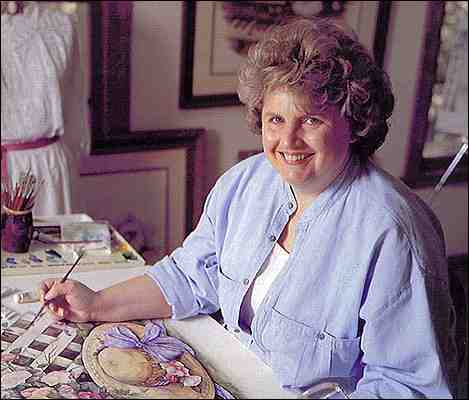 Meeting Paula Vaughan, one is immediately drawn to her easy going manner and endearing smile, which she shares generously. Her conversations are often sprinkled with laughter, and much like her paintings, Paula has a soft, decidedly feminine personality.

A beloved artist whose romantic images have captured the hearts of cross stitchers the world over, Paula
says she knew very little about needlework only nine years ago. That's when she was first contacted with the idea of adapting her art to cross stitch. She admits she was apprehensive. "I thought, ‘They want to do what
with my paintings?' I didn't have the faintest idea what cross stitch was."

Her introduction to painting can be credited to her sister in law, who believed Paula had to be artistic, since both of her brothers were talented artists. "I had never really done any painting," Paula explains.

"She [the sister in law] came over one day and we struggled through a piece. She knew I was hooked after
that. It was so much fun! I still have some of those early paintings. You could finish one in an hour back then,"
she remembers. "You just took a pallet knife and globbed the paint on!"

Inspired by their creativity, Paula says she'd like to try her hand at designing Victorian style fashions. "I’d love
to design children's clothes and wedding dresses. I want to design a full line of clothes." For now, Paula's fashion designing is confined to the canvas, where she creates elaborate, authentically detailed Victorian ensembles. Many of the dresses featured in her early designs were borrowed from friends or found in antique shops and flea markets. "Now I compose in my head and design the dresses as I paint,” Paula explains.

Paula takes all of her success one day at a time, though. "God has just blessed me so much, and once it's
over, that's fine. It's just a special gift He's given me. This is something fun and great in life, and when it's over, it's over. But as long as He's with me and guides me, I feel like I'm in good shape whatever I do.”